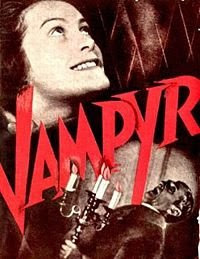 Few films have held the allure for me as Carl Dreyer's "Vampyr" (1932). Filled with unforgettable images, fluid camera work marked by muted gray tones and the disconcerting practice of having the soft spoken cast speak in French, German and English from scene to scene, "Vampyr" is one of the greatest films of any genre ever filmed. The dream within a dream within a dream feeling evoked by Dreyer makes for a richly rewarding experience for the viewer. I first read about this film nearly 30 years ago. It took me this long to finally see. Don't make the mistake I did. Get "Vampyr" tonight!

Based on Sheridan LeFanu's "In a Glass Darkly" and "Carmilla," Dreyer's film follows David Gray (Julian West, actually the pseudonym of a Danish nobleman who also produced the movie) as he arrives in a small Danish town. He is hounded by visions and night visitors which lead him to believe all is not right in this village. As he sleeps, what may or may not be the spirit of a local lord of the manor (Maurice Schutz) walks into his room and leaves a package on which he writes "to be opened in case of my death." The ghostly apparition retreats leaving David with a major case of the willys. David also witnesses the shadows of skeletons dancing in a meadow. There is also a strange man who's shadow has been separated from him. In one incredible scene, the man sits on a bench as his shadow comes to join him. Suddenly someone calls and the man and shadow, now joined get up and leave. 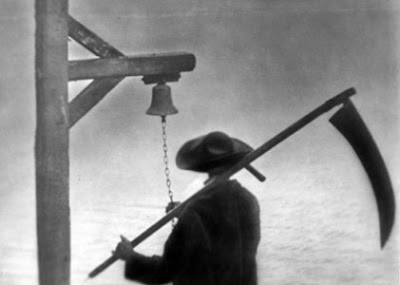 David sees the man who visited him in his sleep and follows him home. He witnesses the man's murder. The man has two daughters, Gisele (Rena Mandell) and (Leone) Sybille Schmitz. Leone lays in bed suffering from some unknown malady while Gisele seems to be possessed by some evil spirit. David opens the package left by the murdered father. It is a book on vampirism. According to the book, a woman named Marguerite Chopan (Henriette Gerard) has preyed upon the town for 200 years. She was an unrepentant sinner who must have the blood of the innocent to continue to live. She has at her disposal, the spirits of condemned criminals, and living sinners who give themselves over to her evil willingly. The old hag is served by the local doctor (Jan Hieronimko). He pretends to aid those stricken by the vampire while in fact, aiding in their demise. The story follows David's attempts to help the two sisters. 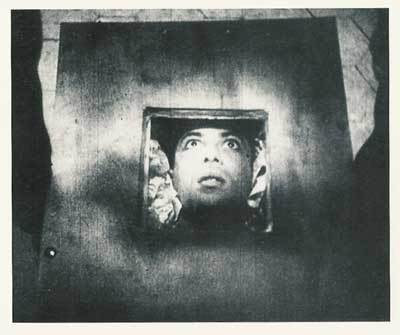 The story is not the drawing card of this film. Rather, the eerie and moving visual images which Dreyer captured. The special effects are still impressive today. The scenes with the disembodied shadows are incredible considering that there was no computer imaging technology 70 years ago. The film is not so horrific as it is lyrically creepy. There are so many famous images from "Vampyr" which are found in most film history books. I've seen many stills from this film and found that the movie is still full of other images which are just as striking as the famous shot of the vampire looking into the hero's coffin during a nightmare. The camera is rarely if ever stationary. There are many tracking shots which must have been an influence on Scorsese. People enter and leave the shot which may travel from outside and through several rooms of the house. All of this makes the movie fly by as there is little or no static in the movie.

"Vampyr" challenges the conventions of movie making. It also challenges the viewer. The small indie film maker would do well to get this film and study it frame by frame. Many lessons on how to stretch the boundaries of the artform are on display. It is ironic that nearly 70 years later, not many filmmakers have achieved what Dreyer did with primitive technology. "Vampyr" is a groundbreaking work of art which should be on everyone's must see list.