This is my 2002 interview with Oscar-nominated actor Brad Dourif from DragonCon in Atlanta, GA. 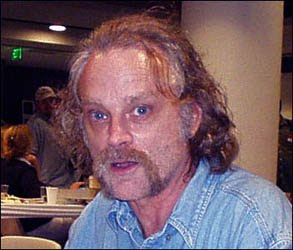 Like the rest of the movie going public in 1975, I took notice of the film debut performance of actor Brad Dourif as Billy Bibbit in "One Flew Over the Cuckoo's Nest." Dourif's tortured performance as the young man almost saved by Jack Nicholson earned him Oscar, BAFTA and Golden Globe nominations. He won the BAFTA as Best Supporting Actor. In the almost 30 following years, Mr. Dourif has appeared in over 100 films and TV shows. Whether playing the lead or a supporting role, Mr. Dourif can always be counted on to bring an intensity and professional edge to his work. I had the pleasure of spending a few moments with Mr. Dourif at DragonCon 2003 in Atlanta.

Rusty White: From an actor's standpoint, how important is the director in crafting your character?

Brad Dourif: It depends on the medium. If it's stage, the two most important artists are the actor and the playwright. If it's film, THE most important person is the director. The director says where the camera goes.

RW: There are directors who are rigid in what they want from an actor while others allow for more give and take. Which do you find more satisfying to work for? 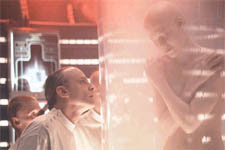 BD: If somebody is really pretty rigid about what they want, that makes my job harder. But on the other hand, it's king of a challenge. I've got to really get that far out of my own concepts to be able to really let what he wants in and try to execute it. Yeah, it's not an easy thing to do, so the challenge is fun. And if he's right, then it's great. If he's wrong, then it's just hard work for nothing. I'm fine with just about any approach as long as the person is not particularly nasty.

RW: One of my favorites is "Wise Blood." Any memories of working with John Huston you could share?

BD: He was great. Huston would go in, in the morning and you would rehearse in front of him. He would say, "You go over here, over here." You'd do it. By lunch we'd finish the scene. Have a one-hour lunch. You go out in the afternoon, same thing. Finish the scene sometimes 3:30 in the afternoon. That was the day. The guy knew what he wanted and knew how to shoot. He knew how it was going to cut. He had it all pretty well figured out. And he was improvising really off the top of his head. So, I would say that of all the people I've worked with, the person who understood what he was going to do, and took the most risks was Huston.

RW:"One Flew Over the Cuckoo's Nest" really brought you to the public's attention.

BD: It brought me from a level of total obscurity to a place of public recognition!

RW:Did that result in a loss of some of the personal freedom that anonymity allows?

BD: You know what, I've been fortunate enough not to be famous enough where that has been a consideration or problem for me at all. I can go where I want to go, do what I want to do. People are respectful and leave me alone. I don'' get swamped. I got the best of both worlds. 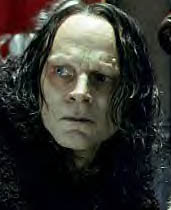 RW:Has that changed at all with "Lord of the Rings"?

BD: No. Not at all. Right now, I'm shooting a series, so who's going to recognize me on the street? I've got a moustache. When the series comes out and it's a hit, then I might have a problem. So far, so good.

RW:Is this for network or cable?

BD: No. It's in production now. It's called "Deadwood."

BD: It's a Western. It's about the town of Deadwood. Will Bill Hickcock.

BD: I play a doctor.

Brad points to David Carradine sitting a few feet away.

BD: His brother is in it. Keith. He plays Will Bill Hickcock and he's brilliant. I mean, he really nails it. 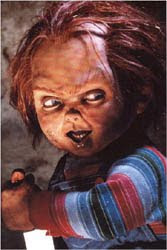 RW:"Child's Play." Do you loop the voice before or after the film is shot?

BD: I do it first. It's just like a cartoon. You do it first and then after that they match the shot footage to my voice.

RW:When you loop the voice, are you with the other actors or by yourself in the studio.

BD: Well, yeah. When I was doing the first one. There's no one else beside myself and anyone else whose voice has to be recorded. The lines are just fed to me raw. For the last one, Jennifer (Tilly) and I did all the stuff together.

RW:Are you classically trained, or are you a method actor?

BD: I'm formally trained, I don't know what classically trained really means. I've worked with Sanford Misner. And I've worked at Circle Rep with Marshall Mason and Lanford Wilson and some really good people. I was lucky. I had a lot of really good influences.

RW:Do you prefer the stage to film?

BD: No, no. I prefer film to the stage. I always like the rehearsal better than I like performing.

RW:Hitchcock said that once the cameras started rolling, he was sick of the movie, because he had already made it in his head. Sounds like you enjoy the challenge of discovering the character most of all.

RW:Have you done these conventions before?

BD: Oh sure. Actually, I've done DragonCon before. A few years back.

BD: I wish I was younger. I'd play a lot more. It looks like a ball! You could get into some really fun trouble here.

RW:I brought my teenagers this year.

RW:And my son's 14. I let them go out. I tried to go to bed, but I end up staying awake waiting for them to come in.

BD: Thinking about all the fun they could be having! Not too much you hope.

RW:Right! Thanks for your time.