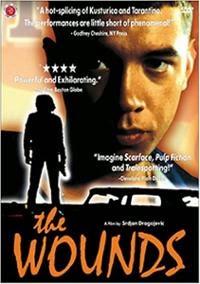 "The Wounds" is director Srdjan Dragojevic's darkly comic portrait of two lost boys on their way to hell in a blaze of glory. The DVD box promises a cross between "Scarface," "Pulp Fiction" and "Trainspotting." Such throwaway claims are a ridiculous way to advertise an original film such as this. "The Wounds" is an amazing examination of delusional hopelessness. The satire is biting. I was amazed to discover that the film was based on a true story. The reason being, that screenwriters usually take bizarre situations like this and screw them up. This story is so full of quirky anecdotes that it almost has to be true.

A number of critics have called the movie harrowing and disturbing. I must be out of touch with reality, because I laughed my ass off throughout the entire film. Granted, there are many scenes of violence. The main characters don't have a clue. Life is cheap. All this aside, "The Wounds" is black comedy at its best. I was reminded somewhat of Emir Kustarica's "Underground." Maybe the Serbs are naturally funny people, even when they are killing each other, because every Serbian film I have seen has had a comedic tone to its center. This may be due to the fact that the movie has its finger squarely on the human pulse of its characters. People are often very funny when they are fucking up. Oh well.

"The Wounds" follows the rise of two teens in post Tito Yugoslavia. Pinki (Dusan Pekic) and Kraut (Milan Maric) idolize their neighbor, a small time thug. The pair runs errands for their hero. They also enjoy watching the local TV series Asphalt Streets. The TV show features interviews with local gangsters. The badguys strut and brag about how bad they are. The director states that this was based on a real TV show in Croatia. Pinki and Kraut want to get on the show someday. They also want to bang the TV shows hostess, the mother of a neighborhood boy they enjoy picking on.

"The Wounds" chronicles their quick violent rise and fall in the underworld. Actor Miki Manojlovic from Kustarica's "Underground" is hilarious as Pinki's father. There are some very rich and original films coming out of Serbia. "The Wounds" and "Underground" are two of the best. If you haven't discovered the wonderful artistic voices from this region of the world, this film would be a great place to start.

The Disc
Great movie. Fair picture and sound. No extras.

Picture Quality: 6/10
I was disappointed that the movie wasn't presented in widescreen. Though there are no problems with what you see, you miss a third of the film with full frame format.

Sound Quality: 6/10
The sound is fine. I enjoy listening to the Serbian tongue. My big complaint is that the subtitles are White. This means you miss a lot of what is being said. Hey folks! Use Yellow letters for the subtitles. Better yet, present the movie in Widescreen format and put the subtitles in the masking space.

The Final Word:
A highly original film. A very black comedy, though I guess it's not really funny when you realize the story is based on fact.

Here's some other movies from the region:
By Kusturica you have "Time of the Gypsies" which is a mix of tragic and comedy. Also "Black Cat White Cat" which is a zany-funny movie.

"Lepa Sela Lepo Gore" is a movie on the Bosnian war by the same director as "Wounds". It has some black humor in it, but is hard to watch in parts. It is ultimately how 2 childhood friends end up on the opposite side during the war and come to fiercely hate each other.

"Tito i Ja" is a lighter funny movie with a message. It is based on the director as a fat little boy growing up in the '50s and idolizing Tito. You can (currently) even watch it in full on youtube with English subtitles.
http://www.youtube.com/watch?v=DIUUBxo5NQw