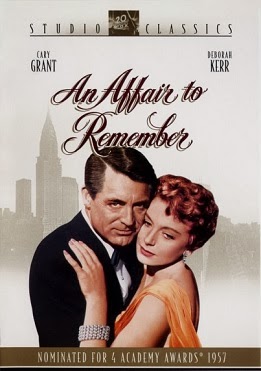 Nicky Ferrante (Cary Grant) is a suave, elegant playboy engaged to a wealthy heiress. Terry McCay (Deborah Kerr) is an ex-lounge singer engaged to a wealthy business men. Both are with their partners for support. They meet on board a cruise ship headed to New York from Europe. The two find themselves falling in love with each other. They must be careful on board the ship because the press is following playboy Nicky looking for a scoop. As the ship lands in New York, the lovers make a pact. They will take six months to get their respective houses in order. If they feel the same, they will meet on top of the Empire State Building. On her way to the Empire State Building, Terry is stuck by tragedy.

McCarey's film is one of those lust, Technicolor films produced by Hollywood in the 50s to draw people back into the theaters after the advent of TV. Milton Krasner's photography was honored with an Oscar nomination. The film also garnered nominations for Best Costume Design, Score and Song. A beautiful as the actual images are, the magic of "An Affair to Remember" comes from the great chemistry between Cary Grant and Deborah Kerr. Both shine. Unlike many other romantic screen parings, you have no trouble believing these folks are in love. When Kerr doesn't show up at the Empire State Building, Grant's pain is palpable.

The Disc
One of the all-time great tear-jerkers. Excellent picture, sound and extras.

Excellent restoration and transfer. The widescreen format is a revelation. For years, this film was not available in its original form. McCary's framing is wonderful. He used the widescreen palate like a painter.

No artifacts, pixilation or delineation problems. The colors are well saturated with little or no bleeding.

Sound Quality: 10/10
The score was remastered in 2.0 Stereo. Hugo Freidhofer's Oscar nominated score surrounds you with nice balance between the ranges. Deep bass mixes with full, rich highs. No loss of dialogue.

Extra Features: 8/10
FOX has answered one of my wishes with the type of extras they are including on their Studio Classics collection. They are making use of contemporary PR materials to give these older films flavor and historical perspective. They have also included commentary tracks by film historians and surviving cast and crew.

The commentary track on "An Affair to Remember" is by film historian Jim McBride and singer Marni Nixon. Ms. Nixon was a Broadway singer and actress who did the on screen singing for many films. She sang Natalie Wood's songs in the film version of "West Side Story." Ms. Nixon relates her experiences on the film, sharing her memories of Grant, Kerr, McCarey and others. Jim McBride examines the film's composition, theme, acting and backstage history.

American Movie Classics has an ongoing series called "Backstory," during which they spend an hour examining the history of a particular film. The DVD includes the excellent episode covering "An Affair to Remember."

The DVD also includes the original theatrical trailer, a photo gallery and the "Movietone Newsreel" from the film's premiere about the S.S. Constitution.

Romantic menu design based on the movie's promotional materials. Easy to navigate. No Easter Eggs found.

The Final Word:
This fourth release in the Studio Classics collection is another keeper. Film fans should rejoice at FOX's decision to showcase the classic films of the past. Please support this series, so other studios may follow suite and showcase their older classics.
Posted by obitguy at 6:11 AM