I've been pulling up some old DVD and Video Risk reviews from the cybertomb that once was EInsiders.com. Hope you enjoy. This review was from October 2000. 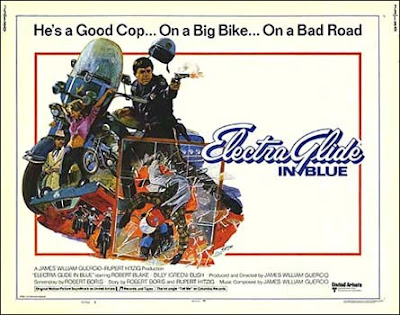 Inner voices may be the result of schizophrenia or in most cases, they are the result of a good person listening to their conscience. Robert Blake's John Wintergreen solves the murder which serves as a backdrop to James William Guercio's 1973 cult classic "Electra Glide in Blue" by listening to his inner voices. Listed as an action film by many video rental outlets, "Electra Glide in Blue" is really a character study of a truly decent guy with an ugly job, surrounded by corruption caused by others who do not listen to that inner voice that God has given them.

John Wintergreen is a motorcycle cop in Arizona who is judged by his coworkers by his short stature. What John Wintergreen lacks in size he makes up in wisdom. His name, "Wintergreen" is symbolic of the inner conflict he lives with on a day-to-day basis; he is wise yet idealistic which puts him in conflict with almost everyone else around him. John Wintergreen dreams of a better life. He hates the motorcycle he is forced to ride...the "elephant under his ass" as he describes the Harley Electra Glide driven by he and his fellow Arizona Highway patrolmen. He believes that if his transfer to the homicide squad is granted all of his problems will be solved. He wants to get paid for thinking. He gets his chance at the big leagues when he discovers the body of an apparent suicide and rants that it is a murder until people listen. He soon learns that dreams are not always what they are cracked up to be. One reviewer described the murder mystery in this film as McGuffin. I agree fully. The murder mystery in this film serves the same purpose as the murder in Norman Jewison's "In the Heat of the Night." It is the plot device which moves the story from point A to B and beyond.

Filmed in 1973, "Electra Glide in Blue" was a contemporary slice of the turmoil that existed during that time. I saw it on its first run and viewed it again recently. The movie holds up today for the simple reason that its director Guercio and screenwriters Robert Boris and Rupert Hitzig present the opposing forces on display in an unbiased manner. The cops and the counterculture are both shown warts and all. This is not to say that the screenplay doesn't have problems. There are several scenes which seem to exist only to put the characters in conflict with each other. The most notable is the scene in which John Wintergreen and his homicide detective mentor Harve (Mitchell Ryan) stand by as their common girlfriend, Jolene (the hot Jeannine Riley) hammers a wedge between them. This scene betrays the rest of the movie as there has been no set up for Jolene's character to act in such a way. This complaint aside, the movie holds up today without feeling dated. Although the theme music which opens and closes the movie is much too grandiose.

As with most character studies, the plot is secondary. This is not to say that the plot doesn't hold the viewer, it does. However, it is Robert Blake's performance which is the film's focal point. Mr. Blake is one of the great character actors in the history of film. He has been sorely underused and overlooked. His portrayal of Perry Smith in Richard Brooks "In Cold Blood" is one of the most chilling performances ever put on film. I remember shedding a tear at the end of that film when he was hung for his crimes. This was quite an accomplishment on Mr. Blake's part, to cause the viewer to shed a tear over his demise when his character brutally murdered a family of four with a shotgun at pointblank range. Here too, Mr. Blake draws the viewer into his life. The viewer roots for him as he maneuvers through the world of corruption and morons which surround him.

The supporting performances are for the most part excellent. Wintergreen's motorcycle partner, Zipper (Billy "Green" Bush) is the ultimate, ignorant redneck cop. Zip is content sitting on his motorcycle in the shade, reading comic books and collecting his government check. The only dream he has is to own a top-of-the-line Harley with no police radio attached. He uses his hatred of the outlaw fringe as justification for everything from planting drugs on suspects to murdering them in hot pursuit. His major flaw is that he doesn't listen to his inner voice. He causes and is caused problems because he has a set-in-stone mindset. To him, the unexamined life is the only one worth living. Wintergreen's perceived Messiah, Harve (Mitchell Ryan) also ignores his inner voices. The corruption Harve represents on the force is more dangerous because it is backed by brains and rank. He is a macho, balls-to-the-wall detective who sees the rift between the cops and everyone else in apocalyptic terms. He sees Wintergreen at first as the protege he can mold into his own "mini-me." Harve comes to hate Wintergreen as John turns out to be the mirror aimed at his inner-self that Harve has avoided for so many years. Jeannine Riley's Jolene is the hot, redneck babe that you would hope to meet while suffering car-trouble in some small town. Her scene with John at the beginning of the movie portrays a woman with a lust for life and a body to make the ride possible. This is a shame because the aforementioned scene with her, Wintergreen and Harve rings false. The fault lies with the writers, not the actress. Veteran character actors Royal Dano and Elisha Cook Jr. also shine. I could have sworn that Royal Dano's jugular vein and artery were going to explode during his confrontation with Wintergreen! Elisha Cook Jr. also shines as Willie, the crazy desert hermit.

Video outlets which describe this movie as an action film do the viewer a disservice. The movie does have several exciting action scenes, however it is not a fast-paced movie. Character takes time to develop, and "Electra Glide in Blue" takes time to show the growth of the characters involved. This movie is obviously a personal work of love by the director. The patient viewer will be rewarded for staying through to the haunting finale.

I watched this movie with my (now EX) wife. She was troubled by the fact that Wintergreen stood by as his partner, Zipper planted drugs on an innocent character. I understood her frustration. Why would a decent person who has sworn to uphold the law turn his back while a fellow office violated that same oath? In the 1980s, I was on the waiting list to join the Las Vegas Police Department. During that time, a dear friend of mine was shot and killed by a Nevada Highway patrolman. I went to the coroner's inquest. I saw law officers stand in support of a rookie who made a bad judgment call. I withdrew my name from the waiting list because I decided that if put in similar circumstances, I couldn't support a brother officer who had taken a life in such a manner. I also realized that if I failed to support my brother officer that someday, when I most needed such help, it would be denied me. Unlike me, John Wintergreen decided to stick it out. His decision to do so has dramatic ramifications for him. In this film, as in all good character studies, growth takes place and the hero deals with this issue.

While researching this review I discovered a bit of trivia that I had been previously unaware. Director Guercio was the producer of the band "Chicago" during the early part of their career. Several members of the band appear in this movie in important supporting roles, most notably lead singer Peter Cetera and lead guitarist Terry Kath.

Cinematographer Conrad Hall makes the most of Monument Valley. Two scenes in this great natural resource bookend the movie.

Producer/Director Guercio was nominated for the Golden Palm at Cannes for his work here. Robert Blake received a Golden Globe nomination as best actor in a dramatic feature film. Both nominations were well deserved. "Electra Glide in Blue" is a very good film which lives up to its potential for greatness in many respects and misses the target on some other points. Nevertheless, it is a better than average video risk for those who love character studies.