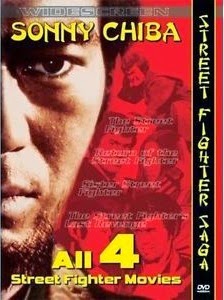 Japanese actor and martial artist Sonny Chiba achieved international fame in 1974 for his performance in the ultra-violent karate movie "The Street Fighter." Directed by Shigehiro Ozawa, "The Street Fighter" was notorious for being the first film to be rated X by the MPAA for violence. Although they weren't released in America for several years, there were three sequels all filmed in the same year as the original film.

Takuma (Terry in the US version) Seguiro (Sonny Chiba)is the son of a Japanese father and Chinese mother. When Terry was just a small child he watched his father shot by a firing squad in WII. Terry has a lot of issues. He deals with them through violence. Terry fulfilled his father's dream and created a martial art that is a mix between traditional Karate and Chinese boxing. Terry is a brute and an assassin. He is for hire for difficult jobs. Terry has not lost all traces of his humanity. He is haunted by visions of his father's death, but lacks the discipline to turn from the dark side. This is the complex character, which made three appearances in the "Street Fighter" films. Although Sonny Chiba appears in a few scenes in the fourth film, he plays a completely different character.

"The Street Fighter" deals with a plot to kidnap a rich oil heiress. The Yakuza and Maria want her. They contact Terry. When he asks for too much money for the job, the badguys decide to kill him in order to keep their plan secret. That is easier said than done. Terry then breaks into a fortified Karate school and kidnaps the girl anyway. He does this to show the good guys how powerful he is. They hire Terry to protect the heiress from the mob. The film then becomes a series of brutal battles. "The Street Fighter" was cut down to 71 minutes to remove the X-Rating. VCI has restored the film. This is the full 91-minute X-rated version. Terry is a mangler. He gouges out eyes, castrates a rapist with kung fu and rips the Adam's apple out of a badguy's throat with his bare hands.

"The Street Fighter" is the best of the series. It is well filmed and the fight scenes are exciting in their brutality. While the series later resorted to silly trampoline assisted flying kicks, the fights in the first one are fairly realistic.

In "The Return of the Street Fighter," Terry is once again hired by the Mafia to take out some witnesses. In a clever opening scene, Terry gets himself arrested so he can silence a witness being interrogated by the police. While still handcuffed, Terry kicks the crap out of several cops and then drives two fingers through the stool pigeonâ€™s throat before escaping out a window.

In this installment, Terry is asked to kill a karate master that he respects. He refuses the job, and once again finds himself pursued by the badguys. Terry kills just about everyone who survived the first film and most of the new characters also. The violence isn't as explicit, but there are still several eye gougings.

"Return of the Street Fighter" suffers from a ten minute sequence in which various forms of martial arts and weapons are demonstrated. The sequence takes place in a gym. It does nothing to further the plot or develop the characters. Each part of the sequence is accompanied by subtitles, which spell out the type of combat or weapon being demonstrated. It is nothing but filler. There are also a couple of scenes from the first film used to explain the relationships of the characters. I would not have minded this if not for the karate class sequence. All in all, there is about 15 minutes of extra footage, which doesn't help the story

"The Street Fighter's Last Revenge" is the real end to the series. This was my second favorite film. Terry battles a corrupt DA and the mob after he is double-crossed by the mob boss. All parties are after two tapes, which reveal the recipe for synthetic heroin. Etsuko Shihomi plays a small part during the first half-hour. She is a sexy, tough ass-kicking chick. Ms. Shihomi plays the title role in the fourth film. Reiko Ike plays a bad-girl who would have felt right at place in the classics of film noir. Reiko plays Aya, a girl who will sleep with who ever she thinks the winner will be. Terry still loves her even after she shoots him. He loves that she is as bad as he is.

"Sister Street Fighter" is the weakest entry into the series. Sonny Chiba only appears in five scenes. With one exception, they are all fight scenes. He also plays a karate teacher named Sonny Kawasaki. His character is a real nice guy. Maybe he is the type of person Terry would have been without the childhood trauma. The star of the film is Etsuko Shihomi as Tina Long. Tina is a world champ karate chick. Her brother was an undercover narcotics agent. When he is kidnapped, Tina is recruited to go after the badguys and rescue her brother. Ms. Shihoma is a great fighter. She is melt in your mouth good looking. Other than her sex appeal, and Sonny Chiba's few scenes, there is nothing to recommend this film. The story and action is reminiscent of the "Batman" TV series. The only thing missing are the "BOFF" and "ZOWCH!" titles which accompany every kick that Batman and Robin deliver.

The Disc
A great deal. Four movies on 2 DVDs. Good picture for the most part. The sound isn't that great, but that is due to average dubbing. No real extras. Four movies for $19.99! Keep the extras.

Picture Quality: 7/10
"The Street Fighter": 9/10 picture rating: VCI did a great job restoring this movie to it's original widescreen glory. Other than a few delineation and grain problems during a couple of night time scenes, the picture is great.

"Return of the Street Fighter": 7/10 picture rating: There are several pauses in the DVD. I've had a few readers write to me about pauses. I've been more aware of them after those e-mails. In addition to the several pauses, there are some delineation and grain problems during the nighttime scenes.

"The Street Fighter's Last Revenge": 6/10 picture rating. Again, there are some delineation and grain problems. There is also some very apparent pixilation during the film's climatic scene.

"Sister Street Fighter": 5/10 Picture rating: There is a 10-minute portion of the movie in which the picture constantly jumps. I played the DVD on two machines and my computer and the jumpiness was there on each. There are also several long pauses during a couple of fight scenes. Not to bad otherwise. Some graininess.

Sound Quality: 5/10
All of the films suffer from bad dubbing. The sound if flat and tinny in the higher ranges. Three different actors appear to have dubbed Sonny Chiba's voice. The first two films have the same voice, but the others are different. It is a bit disconcerting. No distortion problems.

Menu: 6/10
Simple design. Easy to navigate. Nice traditional Japanese music plays over the menu. I feel asleep watching a couple of these movies late at night and the music was soothing!

Extra Features: 2/10
The only extra is a bio and filmography of Sonny Chiba. It appears on each side of both disks.

The Final Word:
I like these movies. Fans of the series will definitely want this DVD. You can't beat the price. That's $5.00 a movie folks! Unless you speak Japanese, and can get the movies with their original soundtracks, I can't see buying these movies anywhere else.
Posted by obitguy at 8:11 PM