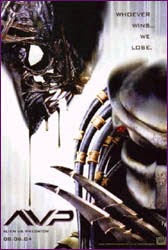 Dumb and Dumber
by Rusty White

reviewed: 2004-08-16 I can't emphasize enough how bad "Alien vs. Predator" is. It is a shoo-in to sweep the Razzie Awards. Writer/director Paul W.S. Anderson proves once again that a mediocre director can make money. This is without a doubt the worst script he has ever written. The movie might have been fun if it had been directed by Ed Wood with a budget of $1.95. Instead, Anderson has taken two successful film franchises and breathed atrophy into both. 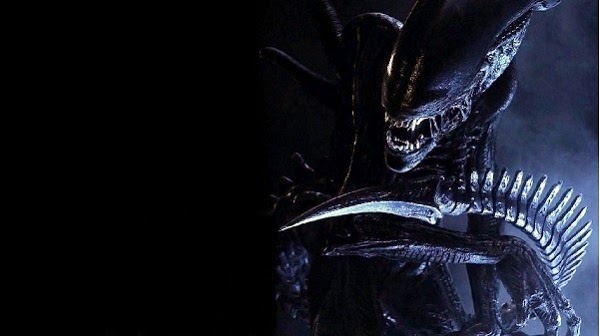 I can't stand when a writer includes a know-it-all character that explains every illogical twist in order to movie the story. Raoul Bova plays an Italian archeologist who predicts every event before it happens. This twenty-something scientist is fluent in Egyptian, Incan and Cambodian hieroglyphics. Taking a huge page from "Stargate" and "Chariots of the Gods director Anderson has the Predators setting up civilizations as hunting preserves. The Predators teach primitive people to build pyramids. Every one hundred years, the intergalactic hunters show up to hunt. Hunt what you ask? Hunt Aliens. It seems that the predators have captured Alien queens. Every hundred years the Predators show up, the primitive people willingly let themselves be impregnated by the Aliens and the Predators enter the labyrinth to hunt the acid-blooded critters. This is a right of passage for the space hunters. 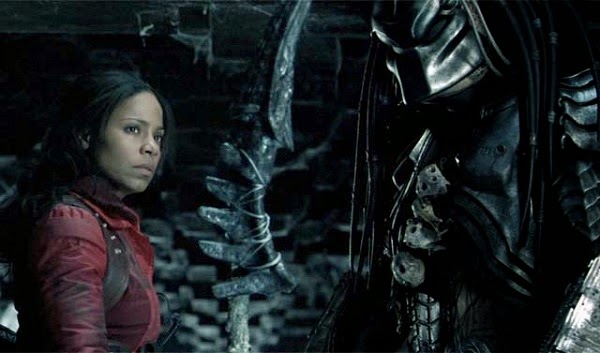 Anderson's script is populated by the most annoying collection of characters featured in either of the popular franchises. Lead actress Sanaa Lathan is no Ripley. She is a hottie, but she is no Ripley. Lathan's Alexa Woods is a twenty-something arctic explorer. She is the best in the world. It's funny that all of these experts are so young. What about years of college and fieldwork to achieve their reputation as an expert? Anyway, Alexa and the other experts have been gathered by the sickly Charles Bishop Weyland (Lance Henrikson), a wealthy corporate giant. Weyland has discovered a pyramid buried 3000 feet below the Antarctic ice cap. He plans on drilling to the pyramid and preserving his place in history. Little does he know that he and his crew are being drawn in as bait by the Predators. As Weyland's icebreaker nears the site, a Laser blast from outer space drills a tunnel to the pyramid. This saves a lot of drilling time. Of course, no one sees the deathray from above. Did I forget to mentioned that the scene takes place at night! I really hated this movie. 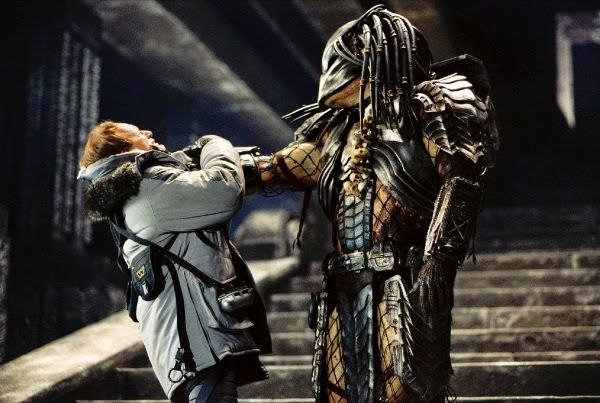 I give the movie a half a star for the few scenes in which the Predators and Aliens fight each other. They are kind of cool. However, when the humans enter the picture, the film grinds to a halt. I would have to provide more spoilers than I have already given in order to go into more detail about why this film sucks so badly. Compared to "Alien vs. Predator" both "Alien Resurrection" and "Predator 2" are cinema classics.
Posted by obitguy at 9:13 AM