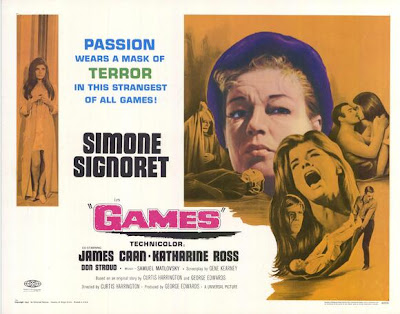 "Games" marked director Curtis Harrington's jump from independent B-pictures to the studio's A-list. "Games" was released by Universal in 1967. It is a lavish, kinky and twisted thriller that keeps the viewer wondering who is screwing over who. Starring James Caan, Katherine Ross, Simone Signoret and Don Stroud, "Games" is a darkly playful treat for a stormy weekend night.

Paul and Jennifer Montgomery (James Caan and Katherine Ross) are a rich young couple living in New York. She has tons of daddy's money and he has a deep interest in pop art, Americana and the occult. They throw lavish parties where the hip New York intellectuals meet to test the boundaries of conformity. While Paul and Jennifer believe they are on the cutting edge of the swinging 60s, they soon learn that they are pikers.

Enter Lisa Schindler (Simone Signoret), a door to door cosmetics saleslady/con artist. Lisa charms her way into Jennifer's house one morning by making Jennifer think they have a mutual friend. After a series of pleasantries in which Jennifer shows off her home to Lisa, Lisa drops the con and goes into her sales pitch. An obviously pissed off Jennifer is about to send Lisa on her way when Lisa becomes ill. A doctor is called and says that the aging woman should have a couple of days of rest. By this time Paul has returned home. Jennifer, who is a bit intrigued by Lisa's mysterious European back ground wants to let her stay. Paul is reluctant, but gives in. He too is charmed by the older woman. Being the adventurous couple that they are, they decide it might be fun having a third person to play with for a while.

Lisa wastes no time showing the couple that games can be taken to a higher level. She introduces them to the joys of Russian roulette. She then conspires with Jennifer to screw with Paul's mind by bringing a fourth player into the household fun. Norman (Don Stroud) is the neighborhood grocery delivery boy who wants nothing more than to ravish Jennifer. At this point the games become darker and deadlier. I'll leave it to the viewer to discover the mysteries which lay beyond this point.

While I saw "Games" when I was a kid, I really didn't appreciate it at the time. It was over my 10 year old head. My interest to see it again was piqued when I read about the film in Phil Hardy's great book "The Overlook Encyclopedia of Horror Films." Mr. Hardy points out some problems with the second half of the film. While I agree to a point that Mr. Harrington could have taken the film down a second route which may have been more interesting and profound, I still like the film as it is. There are some genuinely suspenseful sequences. The acting is superb. The film is beautiful to watch, due in a large part to the incredible set. Paul and Jennifer's apartment is a living museum filled with an eclectic assortment of objects.

Simone Signoret (Val Lewton's Cat People) shines in a part written for Marlene Dietrich. Some short sighted producer would not agree to Ms. Dietrich in the role of Lisa. This is a shame as Ms. Dietrich would have brought a sexual chemistry to the role that was beyond Ms. Signoret's ability at this time in her career. The lack of sexual spark on her part is what, in my mind, keeps "Games" from becoming a great, rather than a good film. However, Ms. Signoret does bring a creepy air of mystery to the role of Lisa. Lisa has a past which includes a stay in the Nazi concentration camps and long lost lovers. Jennifer sees herself in the older woman. Director Harrington has had a lifelong interest in the occult. That may explain the fact that he excels in the horror/suspense genres. Mr. Caan is not asked to do much dramatically. While he delivers a good performance, there is nothing memorable. Ms. Ross on the other hand is called upon to endure some horrific events. The second half of the movie belongs to her. Don Stroud (The Buddy Holly Story) is competent in an early role as the lustful Norman. His good old boy persona and underlying dangerous quality are just right for the small but pivotal role.

"Games" raises some interesting questions. It doesn't answer or fully explore them all, but it is a well done suspense film which entertains. We aren't talking about unlocking the secrets of the universe here. Mr. Harrington's dialogue is rich as always. Phil Hardy called Curtis Harrington one of the most interesting American practitioners of the Horror genre. I have to agree. After spending a couple of hours talking to him, I would add that he is one of the most interesting Americans period.