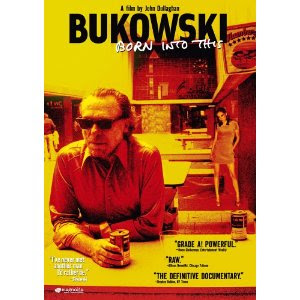 Wow! "Bukowski: Born Into This" is one of the most powerful documentaries I have ever seen. An amazing tale of talent and destruction. Pain and redemption. A love story with scars. This movie needs to be seen by all. If only high school English and literature classes were like this movie. We might have more kids interested in reading and writing. Below is Warren Curry's insightful review of the film from its theatrical run.

Sex, fighting and drinking were topics often covered in the writing of notorious author Charles Bukowski. A voice for those who proudly cling to life’s seamy underbelly, Bukowski’s tales of debauchery also exposed him to be a keen observer of the human condition. His direct, mostly autobiographical prose and poetry earned him a loyal following in his hometown of Los Angeles in the 1960s, although he was first published two decades earlier. Through the years, Bukowski’s legion of fans grew to the point where he gained a degree of international celebrity, and with the fame emerged a mythic status that constantly threatened to overshadow the man.

Seven years in the making, John Dullaghan’s superb documentary, “Bukowski: Born Into This,” is a fascinating examination of the person behind the legend. Most crucial to the film’s success is the extraordinary amount of footage of Bukowski, himself, that Dullaghan has managed to assemble. Whereas many documentaries I’ve seen recently rely too heavily on adoring interviews with friends and fans of the subject, Dullaghan’s film never devolves into a pastiche of talking heads. The director uses interviews with Bukowski’s friends, family members, co-workers and admirers to embellish rather than comprise the documentary’s core.

Henry Charles Bukowski, Jr. was born in 1920 in Germany, the son of an American serviceman and a German mother, and lived until 1994 when he succumbed to leukemia. After surviving an abusive childhood, Bukowski began writing while in his early 20s, but initially found it a tough chore to get published. This left the man with no choice but to acquire various day jobs in order to support himself while he wrote diligently at night. After flirting with death in the mid 1950s, Bukowski took a job with the U.S. Postal Service, a relationship that wouldn’t permanently end until 1970. In the early 60s, along with having numerous poems published, the writer penned a weekly column entitled “Notes of a Dirty Old Man” for the LA-based paper, Open City, and then later for Free Times. It wasn’t until John Martin, the founder of Black Sparrow Press, offered Bukowski the opportunity to write full time that the author finally quit his job at the Post Office. His experiences there would be the subject of his first novel appropriately entitled “Post Office.” Bukowski’s level of recognition was elevated enormously in 1987, when Barbet Schroeder filmed his autobiographical screenplay, “Barfly,” starring Mickey Rourke and Faye Dunawaye.

The Bukowski that we see in various stages of his life is a haggard looking individual, who it seems could be nothing but honest. There’s an obvious cynicism to his outlook on the world, but what’s more noticeable is the great passion with which he lived his 73 years on earth, as is evidenced by his amazingly prolific output as a writer. There were many frivolous drunken escapades to be certain, yet beneath it all was a vulnerable person who grew accustomed to receiving the short end of the stick, but also tried to better himself. When we see him fight back tears while reading a poem that makes him reflect on a particularly painful time in his life, the difficulties of being an iconic figure are plain to see.

As for the interview footage, such notable figures as Tom Waits, Bono, Sean Penn and Harry Dean Stanton are called upon to relate their feelings about the man and also read from his work. The best of the interviewees though is his wife, Linda Lee Beighle, who married Bukowski in 1985. She confirms the trouble her husband had in the final stages of his life -- with his body the victim of various forms of self-abuse -- when for health reasons he simply was forced to be “less than his myth.” Possibly the most troubling scene in the film is taken from footage of Bukowski and Linda that Barbet Schroeder shot before production commenced on “Barfly,” as we witness the paranoid writer at his worst, lashing out verbally, and then physically, at his wife.

Digging past the aura of an icon is an exceedingly daunting task, and if Dullaghan doesn’t completely succeed in this mission, he comes surprisingly close. Were Bukowski still alive, one can only imagine that he’d scoff at the notion of being the subject of a documentary film, but it's also just as difficult to envision the writer not appreciating the director’s sincere effort. 2003 was a spectacular year for documentaries (“Capturing The Friedmans,” “Bus 174,” “Stoked: The Rise and Fall of Gator”), and “Bukowski: Born Into This” is arguably the genre’s first superlative work of 2004. 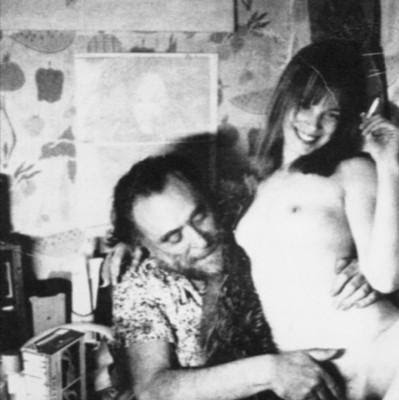 The Disc
Great movie. OK picture and sound. Can't tell you a thing about the extras as the screener only contained the movie.

Picture Quality: 7/10
This documentary contains footage shot over 30 years ago. The quality of some of the source material is grainy and dark. Other footage is great. This is what you expect from documentaries.

Sound Quality: 7/10
Ditto for the sound. Some of it is fine, while other times it seems flat.

Extra Features: 0/10
I can't rate the extras. This screener contained the film only. I have listed what the PR person told me are the extras. I'm sure they are excellent. If I receive a full street copy I will update the review.

Powerful filmmaking. Powerful words. A raw portrait of a dangerous talent.
Posted by obitguy at 8:50 AM