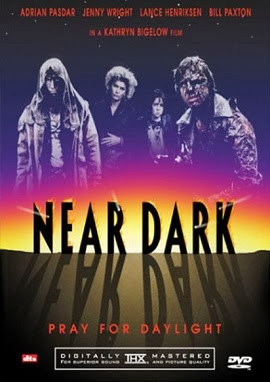 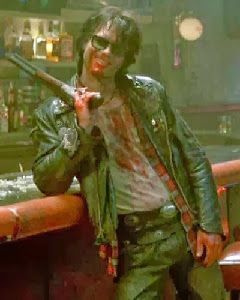 "Near Dark" is the best vampire film ever made. That is tall talk for a two-eyed fat man, but I stand by the assessment. Kathryn Bigelow's 1987 film is the perfect melding of the Western and Horror genres. Ms. Bigelow removed her undead characters from the familiar gothic world in which they usually lurk, and created an original work that scares and exhilarates the audience in equal doses.
Caleb (Adrian Pasdar) is a young cowboy in town for another Saturday night with the guys. He spies a new girl leaving the local ice-cream shop. Mae (Jenny Wright) is a sweet, sexy, apple-pie looking beauty. Before you can say "howdy mam!" the two are off into the night in Caleb's pickup truck. Caleb says he has never met a girl like Mae before. The sweet young thing tells him, "No, you've never met a girl like me before!" Caleb does his best "awe shucks" routine, to get a kiss from Mae. Normally Mae would have no trouble kissing a guy, or ripping out his throat for that matter, but Mae actually likes Caleb. Instead, she gives him a kiss and a small nip on the throat.

Mae jumps from Caleb's truck and runs off. It is getting close to dawn. She jumps into a large Winnebago. Caleb heads home. Before he gets there he notices that he doesn't feel to good. Soon he his staggering down the road. The Winnebago appears again, and Caleb is pulled aboard by an arm covered in a blanket. Caleb has just been adopted by Mae's family. A family that slays together, stays together. The father figure is Jesse (Lance Henriksen), a Civil War navy veteran, the Mother figure is Diamondback (Jeanette Goldstein), a bleach blonde woman who once stopped to give Jesse a ride, there is big brother Severin (Bill Paxton), a wild west cowboy who likes to dress like Jim Morrison, and little Homer (Joshua Miller), a 50 year-old trapped in the body of a 12 year-old body. Caleb is on his way to becoming a vampire.

"Near Dark" follows this vagabond band of living dead as the hunt and feed. Caleb has one week to join their ranks or die. Caleb has a problem with killing, even though he does love Mae.

"Near Dark" works on so many levels. Ms. Bigelow's direction is lean and rich at the same time. She moves the story along at a brisk pace, but also takes time to develop the characters. I dare you to find another B-Movies with such full-blooded characters. The film has several set pieces, which look as if they were directed by an experienced action director. The vampire family battle slaughters the inhabitants of a redneck bar. Ms. Bigelow stretches out the sequence for maximum suspense. In juxtaposition to this deliberately paced sequence, the motel shoot-out sequence rivals John Woo's work for pure evisceral, fast-paced action.

The cast is perfect. Henricksen, Goldstein and Paxton reunited after "Aliens" to for the core of the undead family. The sexy and mysterious Jenny Wright and Joshua Miller, son of the late Jason Miller (The Exorcist) round out the happy home. 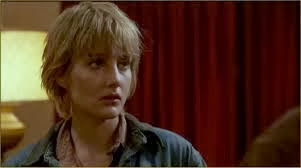 In addition to the great cast and script, "Near Dark" boasts some very original special effects. You have never seen a vampire react to sunlight as happens in this film! The character's skin blackens and begins to smoke until they totally combust and explode. John Carpenter stole the effect for "John Carpenter's Vampires," but Ms. Bigelow did it first and better in "Near Dark." I don't care if you don't like horror films, "Near Dark" will appeal to anyone who likes well done movies. "Near Dark" is Near Perfect!
The Disc
Great movie, picture and sound. Good extras. Great price.

Picture Quality: 10/10
I'm relieved to find that the picture is outstanding. 95% of this movie takes place at night. Needless to say, the opportunity for delineation problems was great. Anchor Bay took great pains with the digital transfer. The picture is clear. The blacks are some of the best you will see. Great use of shadows. The shots of Jesse standing underneath a slow-moving ceiling fan during the bar slaughter are spectacular in its composition and execution. This picture is everything the new picture on the new "Pulp Fiction" DVD isn't! A great film has been given the treatment it deserves!

Sound Quality: 10/10
Wonderful sound. Both the DTS and 5.1 tracks are excellent. The DTS is the better of the two. The redneck-bar slaughter and the motel shootout both illustrate how great the soundtrack is. During the bar scene, there is great balance between the high and low ranges. The 80s anthem "Naughty Naughty" rocks and billiard balls clack amidst the screaming, shooting and stabbing. The low ranges reign during the motel shootout. There are numerous types of firearms used during the shootout. Each distinct type of bullet resonates with its own rich sound.

Menu: 7/10
The menu is easy to navigate. The design is kind of lame. It is composed of interactive scenes from the film that dissolve into each other. There is a greenish tint that detracts from the images. My usual complaint about Anchor Bay not having pictures on the chapter selection menu.

Extra Features: 8/10
Anchor Bay excels at talent bios. There are lengthy text bios of the director and cast. Nice galleries. The two trailers are visually the same. One uses the song "Naughty, Naughty" for the soundtrack, while the second has voice-over narration and dialogue from the movie.

Kathryn Bigelow's commentary track is a bit of a disappointment. I was reminded of William Friedkin's lame commentary track on "The Exorcist: The Version You've Never Seen" DVD. She talks sparingly. When she does, most of it is devoted to telling you what happens on screen. She does give some background info now and again. Someone should give these Hollywood folks lessons on how to do a commentary track. Or maybe listen to the late John Frankenheimer's commentary track on the "Ronin" DVD to see how it is done.

The "Living in Darkness" documentary is pretty good. I enjoyed the interview with Lance Henriksen. He talks about how he drove across country in character, picking up hitchhikers...scaring the hell out of them! Nice interviews with the cast, DP Greenberg and producer Steven Jaffe . Ms. Bigelow is much more animated during the interview than on commentary track.

The deleted scene is nothing special. It is a black and white scene of Adrian Pasdar and Jenny Wright in the desert. It was going to be done in ultra violet to show how vampires see at night.

The Final Word:
My mouth has been watering in anticipation over the release of this DVD. My hunger was quenched."Near Dark" is a must have DVD. Once again, Anchor Bay proves why they are the best in the business!