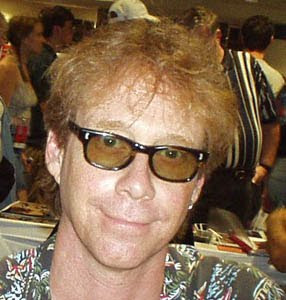 This was my mini-interview with actor/musician Bill Mumy at the 2003 DragonCon convention in Atlanta, GA.

Bill Mumy (pronounced Moo Me) is a 60s Icon. His work on the TV series "Lost in Space" and "The Twilight Zone" forever cast him in the memories of the Baby Boomer generation. Unlike some child actors, Bill Mumy has continued to work successfully in many mediums. He was half of the Musical Duo "Barnes & Barnes." They recorded the cult, novelty song "Fish Heads." In addition to his acting, Mr. Mumy is an Emmy nominated musician, novelist, comic book writer, screenwriter, voice actor and narrator for the A&E TV series "Biography." Of course I didn’t know half of this when I went up to interview Mr. Mumy. I also made the mistake of calling him Mr. Mummy. Oh well. He was cool about it. There were over 350 guests scheduled for DragonCon 2003. I wish that I had the time to research all of the guests, as I believe that Mr. Mumy would have been the subject of a great interview. Here’s what I got. My apologies to his fans, our readers and Mr. Mumy for an interview that probably doesn’t do him justice.

Bill Mumy: I’m narrating "Biography." That’s my current series. A&E. I’ve done 26 this season and I did 8 or 10 over the past few seasons. Now I’m one of the four guys who narrate the series.

Rusty White: How is the music coming?

RW: If it comes from the heart, that’s all that matters.

BM: Absolutely. It may not always be in your neighborhood record store, but you can get it on Amazon.com or Bill Mumy.com. Stuff like that.

RW: How has being an Icon to the Baby Boomers affected your life?

BM: Well, I was fortunate enough to play some roles that have stuck in the consciousness of the public. I enjoyed the time I spent working on those projects very much whether it was "The Twilight Zone" or "Lost in Space" or any number of other shows. I’m glad I’ve continued to work. You know, between some of "The Twilight Zones," "Lost in Space" and "Babylon 5," Barnes&Barnes "Fish Heads" and stuff I have been attached with a handful of things that resonate within the Id of society. And that’s kinda cool. It’s rarely obtrusive to my privacy or anything. I don’t mind chatting with the public.

RW: I enjoyed your cameo in "The Twilight Zone: The Movie."

BM: We did a sequel on UPN this year to "It’s a Good Life" called "It’s Still a Good Life." I’m back as Anthony Freemont 40 years later. It’s very cool.

My impression was that Mr. Mumy was also very cool. Maybe next time I’ll be prepared for a better interview. I liked what he had to say and how he said it.