The Bird With the Crystal Plumage: Vintage DVD Review 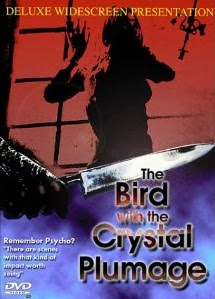 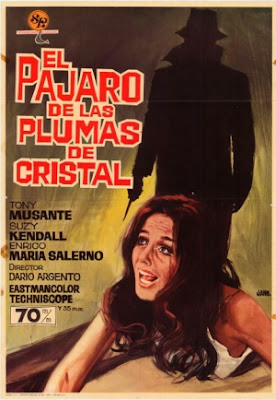 Sam has struggled as a writer in Italy for several years. He finally earned enough off of an Ornithology book to book passage for himself and his British girlfriend, Julia (Suzy Kendall, WOW) back to America. The night before he is scheduled to leave he witnesses a knife attack on Monica Ranieri (Eva Renzi) at the art gallery she owns. The killer flees before the deed is done. Sam is questioned over and over by Inspector Morosini (Enrico Salerno). Inspector Morosini is not satisfied with Sam's story and takes his passport. Sam is upset, but then things begin to get spooky for him. He receives phone calls from the killer telling him to leave the country. Sam can't and so the killer takes breaks from killing other young woman to try and kill Frank. Pissed off, Sam begins to conduct his own investigation of the serial killer. Or course, he has more success than the police department. What follows is tension, red herrings, slashings, car chases, gun fights and a great twist ending. 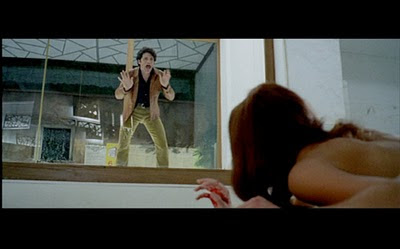 Argento pays homage to both Hitchcock and Bava with his work, however, he adds his own personal touch to emerge as more than just another imitator. Argento strips his film of a lot of the plotting that was so essential to Hitchcock's work. Argento builds a plausible story which provides just enough action to move the story from one scene of mayhem and suspense to the next. It's like a war movie that cuts out the first half hour of melodramatic character building scenes and starts off with a bullet right between the eyes. Argento's work lacks a bit of the eerie poetic beauty of Bava's, but lacks none of his mentors penchant for tension, pacing and suspense. The film is also helped by the camera work of Vittorio Storaro and the music of Ennio Morricone. 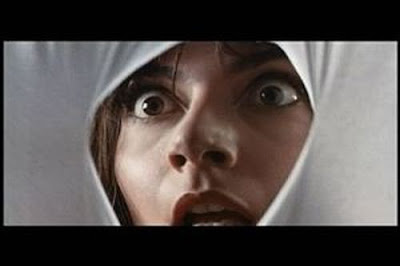 I had never seen "The Bird With the Crystal Plumage" before getting this DVD. I have seen many others including "Tenebre", "Profundo Russo", "Suspira" and "Phenomena." The seeds of near perfection that Argento reached in those later movies is apparent here. There are numerous set pieces which are relentless in their horror. I especially liked the scene in which Julia is trapped in her apartment while the killer chips a hole in the door with a large butcher knife. As the tip of the knife chips through the hardwood door, I was reminded of the scene in the birds where the beaks of the birds furiously pecked away at the doors and walls of the room. Ms. Kendall plays pure terror perfectly in this scene. As the killer toys with the door, it is as if he is saying "See what my lovely blade can do to this hard wood? Just wait until you see what it does to your soft flesh!" One almost forgets to breath watching this scene. There is also a neat cameo by the creepy Reggie Nalder (you know the face) as a hired assassin.

I won't ruin the experience for you by revealing anymore. If you like this kind of stuff, you will be very, very pleased by this film. 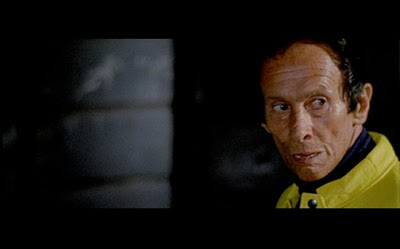 I really like this movie. Maybe I'm getting jaded by all the extras offered on some DVDs. I'm the kind of movie nut who wants to know what the gaffer had for breakfast on the 6th day of shooting. So, I guess I rate the overall disc a little lower because there aren't a lot of extras. I nice commentary would have helped. I know this is petty, and I hope it doesn't stop you from getting the disc, because it is a great hooror film, especially for fans of Argento. 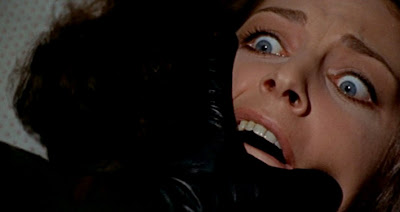 
Great picture. There is one glitch where the picture seems to catch for a second. I don't know if this was a glitch on my disc or was the result of the compression process. Otherwise it's beautiful.


Rich and crisp. Especially noticable when you play the separate track of Ennio Morricone's soundtrack.


Simple, easy to navigate. Gets the job done. 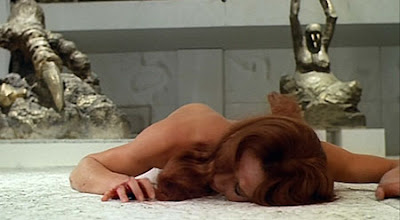 
Not much there. Fans of Argento would like more extras. Still worth getting for the movie itself.


Thanks again to VCI Home Video for bringing these harder to find, restored European horror films to the public. This movie was a major forerunner of the films of John Carpenter and other American horror directors of the 70s and 80s. It is also great to see where Argento started, in light of how far he went.