An Interview with Don Young


For every Tom Cruise or Harrison Ford, there are a thousand Don Youngs. Don Young is a hard working actor who has worked as an extra and character actor. He has had bit parts and larger roles. Don Young is representative of a majority of actors who aren't household names or faces, but nonetheless play and important role in the world of film and television. I enjoyed the time I spent with Mr. Young. The Georgia actor is unassuming and genuine. Talking with him gave me an insight into the day to day life of a man who's work just happens to be acting. 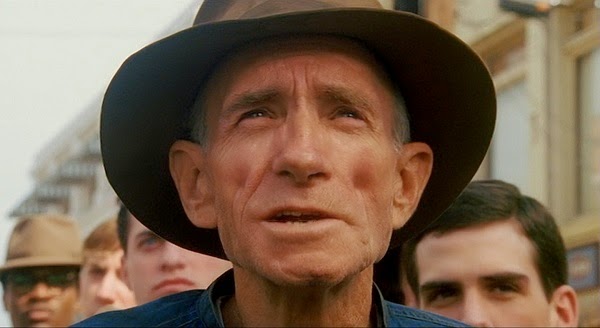 It was the first day of the Memphis Film Festival and yours truly had forgotten his tape recorder. It's a shame because I spent the next hour and a half laughing and talking with Mr. Young. I approached him while waiting to speak with Hammer scream queen Veronica Carlson. I wouldn't get to speak to her for a while.

Mr. Young has appeared in several features since the 1970s including "The Prize Fighter," "Tank," "Wild Hearts Can't Be Broken (sort of)" and the unreleased "Raney" with Jennifer O'Neil. (UPDATE: Since this interview Mr. Young has appeared in a number of films. The screen captures are from his work in "Big Fish" and "We Are Marshall.") He is most recognizable as the Stan Laurel-looking guy in Tony Scott's big budget Miller beer commercial about the Elba River Flood. He's the "I sure could use a beer" guy.

Don Young: People come up to me all the time and ask if that was me. A snotty guy said, 'I saw you. Me and my friends just laughed at your silly self.' I laughed too, all the way to the bank. 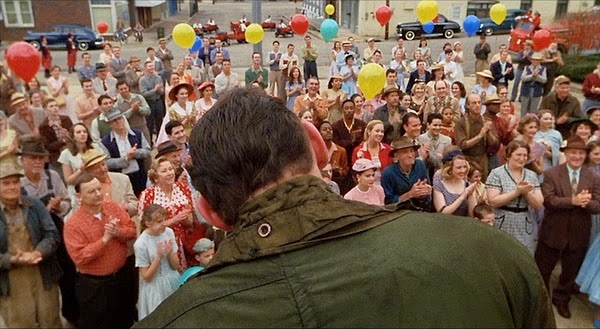 Mr. Young is a union man. He had numerous stories about walking the picket lines.

DY: It's a tough industry. 99% unemployment most of the time. I'm a union man, but I'm diplomatic. If you file a complaint depends on who you're working for. Sometimes you say something and sometimes you don't. I've done a couple of Disney films. They are the tightest company to work for. You have to stay on top of them. But I was working on "Unsolved Mysteries" on location in Tennessee. They were a good company. They screwed up on our meals, but it was no big deal. The producers and director were doing their best. When we wrapped, there was a $235.00 meal penalty bonus on our checks. They knew they had messed up and reported it voluntarily to the union. No one had to say a thing because we were working for a reputable company.

Rusty White: You worked with Steve Martin in "A Simple Twist of Fate." How was he to work with?

DY: I found him to be a genuinely nice guy. there were a lot of folks who bad mouthed him, but hell, it's all how you approach someone. If you go up to stars in the middle of production and bother them, they may get rude. They're busy. People take that personal and start saying bad things. They don't think about what they did wrong to provoke the reaction. Steve was great to me. He gave me a real nice autographed color photo. I was the only one who got one. The make up girls and several of the crew were asking about it. I wrote Steve to tell him thanks and he sent me another.

Mr. Young went on to tell me how he moved up from an extra to a principle actor.

Mr. Young proceeded to jump up and down, squealing like a girl in imitation of the production assistant.

We went out to the lobby to smoke a cigarette.

DY: I became friends with Troy Donahue at a convention a few years ago. He's always on my case about smoking. If he reads this he'll get mad I hadn't quit yet.

We got to talking about how I was a lawyer by profession. He gave me a stern look and said that he wouldn't hold my profession against me. You can't help but like this guy. Mr. Young used this a transition into his memories of working on the TV series "In the Heat of the Night."

DY: I wasn't surprised when Hugh (O'Conner) killed his self. It was a shame. The drugs got a hold of him and wouldn't turn loose. A real shame. Great bunch of actors on that show. Anne Marie who played Virgil's wife is as nice a person as you'd like to me.

DY: Didn't get to know him that well. He was different. We didn't really connect.

Mr. Young works steady in TV commercials. Besides the aforementioned Miller Beer commercial he did a memorable Nike shoe commercial.

DY: The kids found out I was going to be in a Nike commercial with Frank Thomas of the White Sox. They went crazy. Get his autograph! I love acting. I get to travel around, meet great folks in the business and out. It's great work if you can get it!

The afternoon panel discussion was about to start and we had to say our good byes for now. We did talk again over the next couple of days, but that's the making for another story.