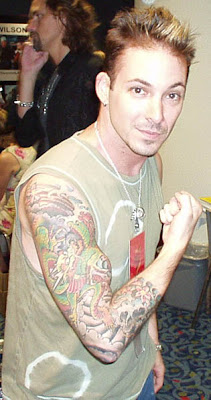 This was my interview with former actor Noah Hathaway at the 2003 DragonCon convention in Atlanta, GA.

Actor Noah Hathaway became a teen heartthrob in Wolfgang Peterson's fantasy epic "The Neverending Story." As one fan at DragonCon put it: "You were the cute one!" Mr. Hathaway was making his first fan convention appearance at DragonCon. Fans of "The Neverending Story" and "Battlestar Galactica" lined up to meet the young man. Mr. Hathaway has retired from the movies. He and his wife are in the beginning stages of opening a Chopper Shop in Miami. Noah told me to sit down and hangout a while.

Rusty White: So, this is your first convention?

RW: It's kind of a show from this side of the table to, this being a costume convention.

NH: Absolutely, absolutely. I wish I got to get up and see a little more yesterday, but I got stuck in here. But yeah, the costumes are incredible, the lack of costume is incredible. I hear tonight is wild. I'm judging the costume contest, so I'll have a good seat.

A Fan named Jamie: Some are scary!

NH: I've heard. Some are good and some are scary.

Jamie gets and autographed photo of Mr. Hathaway as Atreyu from "The Neverending Story." Jamie says the photo represents "an enduring childhood memory."

Noah has some elaborate ink on his right arm.

RW: How long did it take to get that tattoo?

NH: I did about 5 four-hour settings. That's about all I could take.

RW: You must be married. It takes someone who is married to endure that much pain.

NH: (laughs) That's funny that you say that. This is our wedding ring.

He shows me his tattoo 'wedding ring.'

NH: That hurt more than any other tattoo I have. We are in the shop. I can handle a lot of pain. He does the first line and my eyes budge out. I yell. My wife is sitting there freaking out. When they do her, they actually had people coming in the shop leave because she was yelling. The manager had to come in as say "Come on honey, please keep it quiet." I had never experienced, I mean this sucked! I would never do a finger again. This (his arm) was easy. They only part that hurt was the elbow. 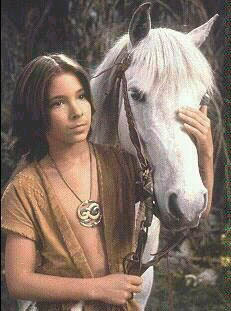 A group of fans come up and share their memories of "The Neverending Story" with Noah. One girl picks a photo from his table. "You were the cute one!" she says. Several other ladies receive hugs from Mr. Hathaway. Like many kids of the 80s, these folks have fond childhood memories of the Wolfgang Peterson film.

RW: That is so cool.

NH: Yeah, it always makes me feel good. People are so grateful. You never think when you are shooting a movie, or you are doing what you're doing that people, that you touch people. This is really showing me what certain movies mean to people. I never knew. I've had people come up to me crying, hugging me, telling me... I've gotten this a lot. I had people tell me that "Your movie got me through a lot of really hard times." I was blown away by that. I never knew that it was deep with people. It's really touching. It's overwhelming at times.

FAN: I have a question for you. At the end of the film, Bastian leans out the window and screams the Empress's new name but you can't hear it. I've played it a million times and can't make it out.

NH: 'Moon Child.' There is a thunderstorm on the soundtrack. Everybody has the same question.

The fan is also a biker. He tells Mr. Hathaway that he is going to send folks to his website.

NH: Yeah. I've been building a site. I'm trying to open a Chopper shop this year. I've been welding away, making frames and pipes. It's called 5150 Choppers. So I'm trying to start a website. We don't have any bikes completed. We'll have one or two by the end of the year. I already talked to the guy who founded DragonCon and he said "Absolutely, if you want to come next year and bring the bikes." So we're going to do a "Battlestar Galactica" themed bike and bring another one of the bikes.

FAN: You grew up cute! I bought my first color television set to watch "Battlestar Galactica." I'm not sure what I think of this new version of it.

NH: Everybody says the same thing. We all feel the same way.

FAN: The previews look interesting but the Sci-Fi channel is notorious for screwing things up.

NH: Yeah. I've been riding since I was a kid. I've probably had 15 different bikes. I raced super-sport bikes a little bit. I had my first Harley when I was 16, so it was something I've been tinkering with. So I want to open my own shop. We're going to try and open this year in Miami. It's hard. You're starting out in the garage and see where it's going to take me. We'll bring them to the conventions and that'll help spread the word.

RW: Make the ride to Sturges.

NH: Yeah. I don't know about making the ride. We might make the trailer ride. That's a hell of a long ride from Miami. But I think about them. I wake up in the middle of the night dreaming about them. My wife gets mad because that's all I really think about or do these days. So, we're just going to try and get a couple of bikes up and going by the end of the year. It takes,…for people who've been doing it ten years, some bikes take 6 months to build. It'll probably take me the rest of the year to get one done.

NH: The Biker Build Off. Billy Lange, he's the man. That's who I've kind of been stealing ideas from. Everybody steals ideas from each other. He's amazing. So that's kind of what we'll have our bikes look like, but they'll be a little different. They'll be pretty badass looking.

RW: Do you feel conflicted. Would you rather be in Milwaukee this weekend for the 100th birthday party for Harley Davidson?

NH: I don't know. Harley's been influential, but I'm not a big Harley fan. They're very limited. The bikes we're building… I build the frame, pipes, handlebars. We're sending stuff to get patented so people don't steal our stuff. Everything is from scratch. With Harley, you build it, then you've got to take it apart. Break the neck. They started it all, but I like the way bikes are going now.

RW: It must have been an overwhelming project, working on "The Neverending Story."

RW: Was there a language barrier with director Wolfgang Peterson?

NH: He had broken English.

A couple of fans come up and buy autographs. Noah feels uncomfortable taking money for pictures.

NH: That's a little thing I'm getting used to. It was nice to have the wife here yesterday to take the money. It's a little weird exchanging pictures for money. You know what I mean. It makes me a little uncomfortable. I guess I'll get used to it.

RW: Everyone who comes here expects it. I interviewed Kim Hunter at a festival in Memphis. It was her first one right before she died. She was totally unaware that she was supposed to bring pictures or charge for autographs. She was doing it for free. She said "I guess I could have made some money if I'd known."

NH: It's just weird. When you've never sold a picture or autograph in your life. We had a showing of "Battlestar" in LA last week. I walked out the door and there were 50 people. I signed a ton of autographs. Other actors walked away without signing. These are the fans. I guess it depends on who you are.

RW: Back to Wolfgang Peterson.

NH: He had broken English. Half way through the film he stopped speaking English entirely. I speak French fluently, so that really helped. He stopped speaking English entirely halfway through the film. Spoke solely in German. I picked it up pretty quick. Couldn't speak it much, but I understood what they were talking about. His English was so-so, but now, we've bumped into each other a few times. His English is perfect now. This was his first American movie, so it was a little rough.

NH: I'm a martial arts buff, so anything martial arts. "Blade Runner," "Scarface," "Apocalypse." I like "Citizen Kane." I like a lot of stuff. I'm an action fanatic. I love John Woo movies. I'm not a huge drama person. I think I liked them more when I was younger. Now, I'm getting a little older, got more responsibility, I don't need to be depressed. You know, it's rough enough out there. I don't want to sit and cry for an hour in a movie. I'd rather have an action or a comedy.

RW: Besides the Chopper business, anything coming up.

NH: Not really. I have some friends trying to drag me back into acting, but I'm fighting them and trying to focus on getting this chopper thing going. I'm not a mechanic and I didn't grow up with my dad being a mechanic, so I'm learning as I go. Which is kind of rough.

NH: Trying to, trying to.

RW: Good luck with 5150 Choppers and thanks for your time.