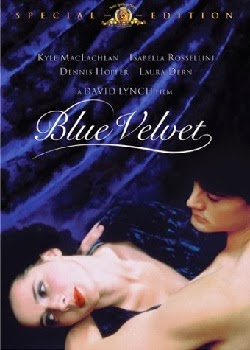 Review
David Lynch's "Blue Velvet" was one of the most controversial films of the 1980s. Critics either loved it or hated it. I remember watching Siskel and Ebert arguing about the movie before I saw it. Roger Ebert condemned Mr. Lynch for humiliating his leading lady Isabella Rosselini. A snippet of that exchange is included on this disk. Maybe I'm a little more jaded than I was in 1986, for I didn't find the movie to be as upsetting as it was back then. I also was surprised to find that one second viewing, "Blue Velvet" is much better than I remember it being. I feel it is the best film David Lynch has composed.

Jeffery pays a visit to Detective Williams house later that night to see if the policeman has uncovered anything. Williams tells him that while the case is under investigation, he can't reveal anything. Jeffery leaves. Sandy meets Jeffery outside. She tells Jeffery that she overheard her father talking about the ear. She says a singer by the name of Dorothy Vallens (Isabella Rossellini) may be involved.

Jeffery is to curious for his own good. He decides to break into Dorothy Vallens' apartment, hide and watch her. His curiosity is less innocent than the mystery solving gang from "Scoobie Doo." Jeffery will find himself drawn into a twisted world that may just destroy him. Jeffery is about to meet a sick and twisted man named Frank (Dennis Hopper).

"Blue Velvet" examines the duality of human nature. Good and Evil do battle for the souls of every character in this movie. The opening sequence is a montage of the Norman Rockwellish small town of Lumberton. Bobby Vinton's rendition of the title song plays over images of the flag, mom and apple pie. The song fades out and the eerie sounds of a dark nether world rise as the camera drops below the surface of a well manicured lawn to reveal a violent insect battle. David Lynch sets his camera to ferreting out this mysterious underbelly of society.

As is revealed, no one is pure. Sandy comes closest, but she is revealed to be as much of a voyeur as Jeffery in that she eavesdrops on her father and encourages Jeffery in his quest. She tells him as things escalate that she doesn't know if he is a detective or pervert. He doesn't clear up her doubts. 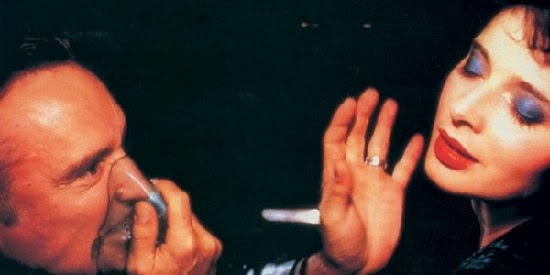 Kyle MacLachin's Jeffery is a modern version of Jimmy Stewert's character in "Rear Window." His uncovers a world of sex, drugs, rape, perversion and inhumanity that he never knew existed. When he asks "Why do people like Frank exist?" it comes across as sincere. Jeffery learns that Dorothy's husband and son have been kidnapped by Frank and his gang. Frank carries out ritualistic rap0es of Dorothy on a nightly basis. When Jeffery and Dorothy become lovers, Jeffery at first repulsed by Dorothy's requests that he hit her during sex. He is further repulsed when he finds that he too has a little Frank in him.

"Blue Velvet" is a tough movie to watch, especially for those who are not as familiar with Mr. Lynch's work. Much of the success of the film is due to the total commitment to the script shown by the lead actors. Dennis Hopper and Isabella Rossellini play out a morbid dance of physical and psychological abuse and obsession. This was Dennis Hopper's first film after a three year hiatus to kick drugs and alcohol. It is one of the best performances he has ever delivered. Frank is the epitome of human evil. What makes his performance so powerful is the fact that he is able to let the viewer know that he does love the woman he torments. It is a scary and disturbing performance. Watching this film made me want to revisit "Mullholland Drive" and reconsider my harsh review of that film.

Picture Quality: 10/10
This film is full of stunning visuals. From the rich surreal colors of the films opening, to the dark recesses of Dorothy's apartment "Blue Velvet" leaves impressions on the viewer's mind which aren't easily forgotten. David Lynch oversaw the digital re-mastering of the picture and sound for this DVD. I noticed no pixilation or artifacts. Excellent delineation between light and dark colors. There are two scenes in which the leading ladies appear out of the darkness. Early in the film, Laura Dern walks out from beneath a weeping willow tree. She emerges from total darkness into the soft light of the street lamp. It is a beautiful image perfectly rendered. The second such image was the scene which upset Roger Ebert so badly. As with much of this movie, the scenes take place in semi-darkness. No loss of clarity or color. Excellent flesh tones.

Sound Quality: 10/10
"Eraserhead" was the first David Lynch film I saw. One thing that struck me about that movie were the incredible sounds which permeated the movie. The sounds were almost like another character. The late Alan Splet was the sound designer on both "Eraserhead" and "Blue Velvet." His work creates a creepy ambiance which accents the visuals and performances. The DVD soundtrack is outstanding. You want to take a bath after hearing and viewing this movie.

Menu: 10/10
Nice design. The menu actually has an Easter Egg which changes the images from Good to Evil. Excellent use of images and sounds from the movie. Easy to navigate. The second Easter Egg is found on the Special Features menu and involves the director's diet. Easter Eggs:
Movie Collage
How to find it:
- Highlight "Play Movie."
- Press the left arrow key.
This will bring up an entirely new menu entry called "Strange World" in the upper half of the screen.
- Press "Enter."
Now and you will be taken to an interesting collage of scenes from the movie, combined with interesting messages.

Extra Features: 10/10
"Mysteries of Love" is a 70 minute documentary which includes new interviews with Dennis Hopper, Isabella Rosellini, Kyle MacLachian, DP Frederick Elmes, composer Angelo Badalamenti, Editor Duwayne Dunham and others. The documentary also includes a great archived interview with David Lynch. That interview made me ashamed for calling him pretentious in my "Mullholland Drive" review. Mr. Lynch came across as idealistic artist with some very endearing quirks. The documentary includes its own chapter selection menu.

The trailers are cool. There is an extensive photo gallery which is divided up on the menu by subject matter, actor or photographer. I really enjoyed the fact that MGM included the Siskel and Ebert discussion. Ebert went over the edge, but hey, this is American and you are entitled to your opinions.

The Final Word:
You will either love this or hate it. To some it is an important statement about human nature. To others it is perverse pornography. I think it was a powerful film by an important artist.