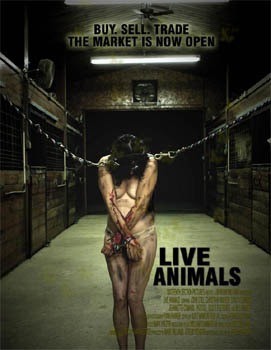 My buddies, director Jeremy Benson and producer/composer Mark Williams are just about finished with post production their 5th feature film. "Live Animals" deals with the white slave traffic. It stars John Still from Craig Brewer's Hustle & Flow and The Poor & Hungry. I've watched these guys grow as filmmakers over the past six years. The fact that my scenes in Live Animals ended up on the cutting room floor is proof that Jeremy has matured as a director! This is by far the best work by Jeremy and Mark. I predict that you will be seeing this title soon at either the theater or video store.

CLICK HERE to view the trailer for Live Animals. 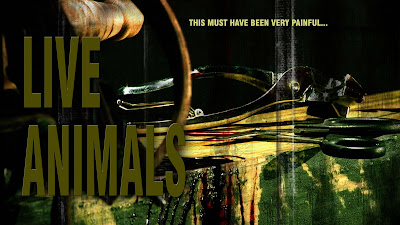 Jeremy's 4th film was the 2005 horror film Shutter which also starred John Still as a homicidal redneck. The movie opened some doors for Jeremy with a couple of producers. If you look close toward the end of the trailer you can see me get my head cut off with a shovel!!!

Click Here to read an archived review of Shutter at Entertainment Insiders.

As long as I'm passing out the love to my friend, here are a couple of more links to give you an idea of a guy you will be hearing from very soon.


Jeremy and Mark's third feature film, The Smallest Oceans was an intense drama about fatherhood. This movie marked the beginning of Jeremy leap from amateur movie maker to a real director. The movie won Honorable Mention as Best Feature Film at the 2005 New York International Independent Film & Video Festival.

I met Jeremy in 2001 when he and Mark rented a local theater to show their first movie Friday's Menu. The comedy showed a lot of promise. It has its share of flaws but there are some great moments of comedy in the film.

Just so you don't think this is a fluff piece of me kissing my friends's ass, Jeremy's second film Nothing But Flowers is a total piece of crap which I refused to review. It does however contain a topless lap-dance scene by Peaches.
Posted by obitguy at 2:05 AM 1 comment: