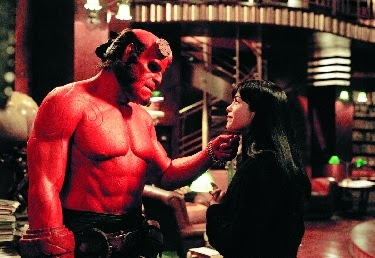 "Hellboy" Rocks! I am usually wary when I go to see a comic book movie. After "Blade 2" I was wary of director Guillermo del Toro. "Hellboy" washed those concerns right down the drain. Based on the Darkhorse comic book, "Hellboy" tells the story of a blue-collar demon who works for the goodguys, kicks ass, loves nachos and just wants to find a girl to love him, horns and all.

This week I watched the great DVD "The Lon Chaney Collection." One of the amazing things about Lon Chaney Sr. was that the humanity of his characters shined through beneath his "1000 Faces." Ron Perlman delivers the best performance of his career under a mountain of makeup and prosthetics. Perlman plays the title character, a demon brought to this world by the Nazis at the end of WWII. The allies, aided by the young Professor Bruttenholm (John Hurt) disrupt the Nazi black mass before they badguys can unleash a horde of demons on the world. One small demon does enter. It is an infant. However, it is a very important demon. One who holds the key to the apocalypse. Rather than destroy the beast, he is taken to America where he becomes a weapon in the arsenal of the "Office of Paranormal Research and Defense." 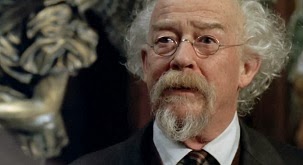 Cut to the present time. Hellboy lives a secluded life within the confines of the FBI's secret facility. He likes to sneak out occasionally. He is an oddity who longs to be normal. How is the demon in Hellboy tamed? He shaves his horns off. Like Samson without his hair, Hellboy without his horns is a being with freewill. He was raised by the kind professor. He calls the professor Pop and the professor loves him as a Son. Unfortunately the professor has cancer. He recruits a rookie FBI agent to take his place. Agent John Meyers' (Rupert Evans) only qualification for the job is a pure heart. Hellboy needs someone who can see past the red skin, tail and horn stubs to accept him for the humanity within.

Hellboy was conjured into this realm by a resurrected Rasputin (Karel Roden). Though he died during the alliesâ€™ attack, he is once again resurrected. Rasputin wants Hellboy to fulfill his destiny. Hellboy just wants to kill evil orcs and get Liz (Selma Blair) to love him. Liz is human but has powers that brought her in contact with Hellboy. I really don't want to give away anymore of this film.

Mr. del Toro's direction is great. The action sequences have none of the quick-cut, frenetic quality that marred "Blade 2." The action scenes are rousing, fast-paced, but shot in such away that you can relish the entirely of the battles. The suspense scenes are also expertly handled. While the direction is excellent, what makes this film work is Ron Perlman.

Anyone who has ever been on the outside looking in will be able to identify with Perlman's Hellboy. Despite his great strength, Hellboy is a freak. One part "Terminator" one part "Marty." It is a smartly written character, wonderfully portrayed. I can't wait to see it again!

Posted by obitguy at 7:44 PM No comments: