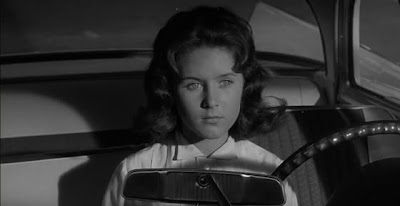 Former child actress Lori Martin died April 4 at age 62. Ms. Martin played the daughter of Gregory Peck and Polly Bergan in the classic thriller "Cape Fear." Director J. Lee Thompson wanted Hayley Mills to play the part, and admitted that he gave Ms. Martin a hard time during the film's production. Ms. Martin was perfect as the young target of Robert Mitchum's murderous and lustful assault. The movie scarred the crap out of me when I saw it at age 10. It remains far superior to the Scorsese remake. When acting opposite such heavyweights as Gregory Peck, Robert Mitchum, Polly Bergan, Telly Savalas, Martin Balsam and Jack Kruschen it would be very easy for a young actress to become lost in the scenery. Ms. Martin more than holds her own in the classic film. Her scenes with Mitchum are especially disturbing. I made sure both of my daughters saw this film when they were young to help re-enforce my messages about not talking to strangers.
Posted by obitguy at 11:09 AM 7 comments: