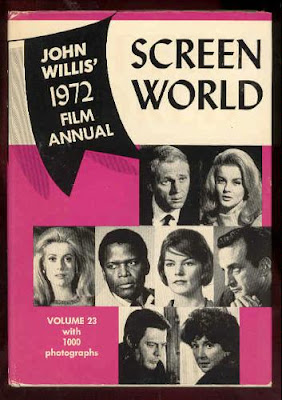 In the late 1960s and early 1970s spent many hours feeding my thirst for movie knowledge at the Memphis Public Library then located at Peabody and McLean. I first saw "Nosferatu" in the basement of that library. I can tell you that I was one scared 10-year-old walking home in the dark after that film. While at that library I also discovered the wonderful series of books edited by John Willis titled "Screen World." The picture is of the first one I actually bought with my paper route money. Film and theater historian John Willis died on June 24th at age 93. I know there are millions of other movie buffs out there who cherish the books put out by Mr. Willis. Thanks for sharing your vast knowledge with the rest of us.
Posted by obitguy at 11:19 PM No comments: