Blog god Arbogast of "Arbogast on Film" asks his readers and fellow bloggers "Who they might have saved?" Which character in a horror film would you have saved from their gruesome fate? While "The Dirty Dozen" isn't a horror film, I felt compelled to answer Arbogast's call. Unfortunately for you, I can't write as well as Arbogast.

Panama City Florida, 1967. The date and location of the best family vacation of my youth. Great beach, a cool amusement park with the best walk-through haunted house you can imagine, everything a 9-year-old boy could love. If you count all the girls on the beach I could only dream about…well, that's a story for another day. This was the only vacation during which I can remember the family going to see a movie. Robert Aldrich's "The Dirty Dozen." Cleveland Brown's legend Jim Brown portrayed one of the soldier convicts: 'Robert Jefferson.' Even at nine years old, I was upset when Jefferson's fellow soldiers were more concerned with cheering him on, than scanning the battlefield for murderous German soldiers. The reaction shots of Lee Marvin and John Cassavettes after Jefferson is machine-gunned to death only yards from freedom captured perfectly the turmoil I felt as a kid watching this movie for the first time. 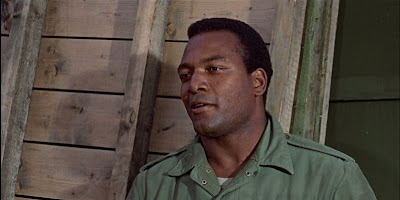 I know "it's only a movie" but Jefferson's death in this film never fails to stab me in the guts. I've seen the film at least 50 times over the past 43 years. Each time I truly believe that Jefferson is going to make it this time. Why do I feel this way? Let me take you back 26 years to explain.

Las Vegas, 1984. I was working as a cab driver for Checker Cab. A call came in that there was a late flight at McCarrin Airport. This was after midnight. I showed up first. The rules stated that we did not double load, meaning pick up more than one group of people headed for different destinations. It was late, I got there first, I needed the money so screw the rules. Two couples crowded into the back of the cab and one of the largest men I've ever seen got up front with me. I knew right away who he was.

"Are you Jim Brown?"

If it had been just the two of us, he would have been truthful, but I imagine the two European couples in the back lead him to say…

I ignored his lie and told him about Robert Jefferson's affect on my life. 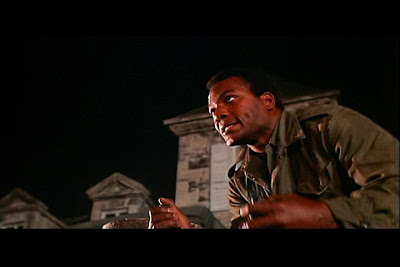 "From the first time I saw the movie I hated the fact that Jefferson got killed. I understand now, that this was the 1960s and Aldrich wanted to show that Blacks died for their country just like Whites. Ironic since most of the country didn't appreciate that sacrifice when it happened. Hell, most folks probably felt like Telly Savalas' Maggot: "Do we have to eat with N*****rs." But times have changed and the country has come a long way since the 60s. Maybe Jefferson doesn't have to die anymore to make the point. Every time I see the movie I hope that Jefferson's going to make it this time."

I dropped the guy off at his hotel. He paid the $8.00 for the ride. Then he pulled out his wallet and handed me a tip. He smiled and walked away. He had not commented on what I had to say about "The Dirty Dozen." I looked at the tip. It was a $50.00 bill. I knew he was Jim Brown. I'd much rather have had an autograph though.

Great story. I've loved this movie since I was a kid. Always felt that Jefferson should have made it.