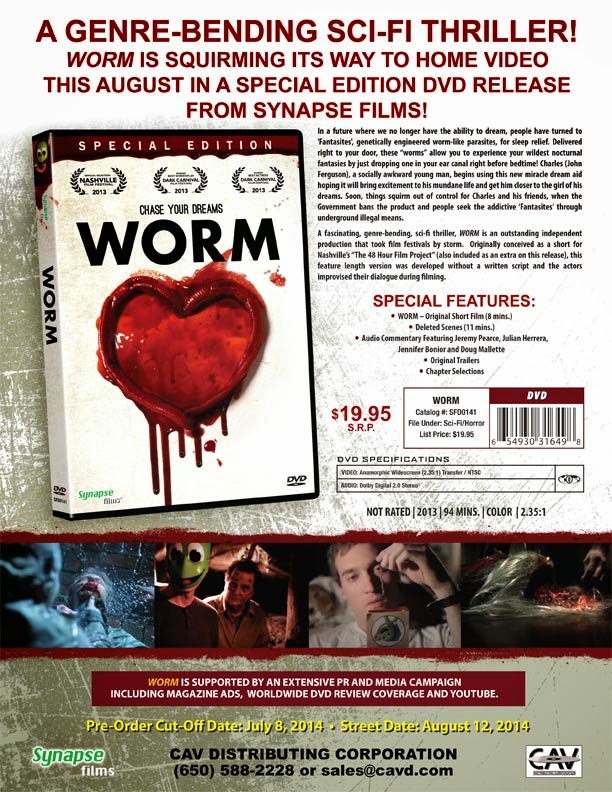 
In a future where we no longer have the ability to dream, people have turned to 'Fantasites', genetically engineered worm-like parasites, for sleep relief. Delivered right to your door, these "worms" allow you to experience your wildest nocturnal fantasies by just dropping one in your ear canal right before bedtime! Charles (John Ferguson), a socially awkward young man, begins using this new miracle dream aid hoping it will bring excitement to his mundane life and get him closer to the girl of his dreams. Soon, things squirm out of control for Charles and his friends, when the Government bans the product and people seek the addictive "Fantasites" through underground illegal means.

A fascinating, genre-bending, sci-fi thriller, WORM is an outstanding independent production that took film festivals by storm. Originally conceived as a short for Nashville's "The 48 Hour Film Project" (also included as an extra on this release), this feature length version was developed without a written script and the actors improvised their dialogue during filming. 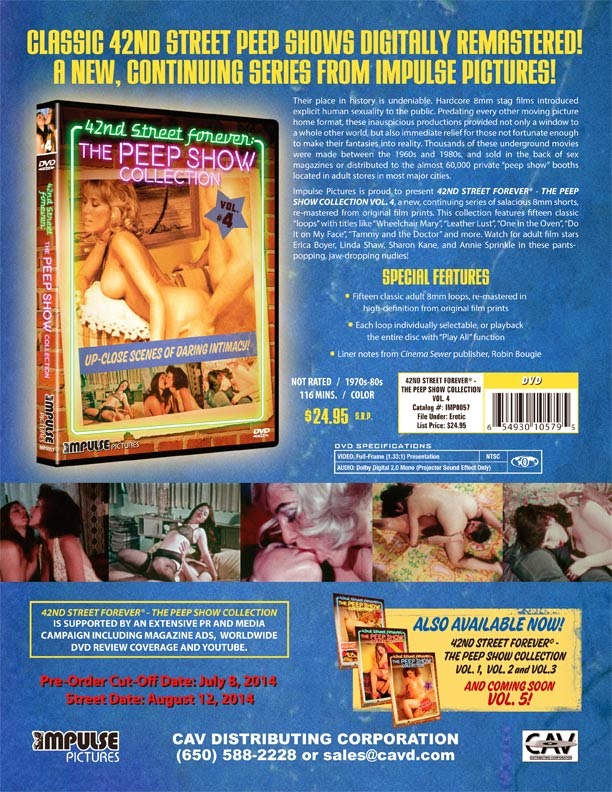 
Their place in history is undeniable. Hardcore 8mm stag films introduced explicit human sexuality to the public. Predating every other moving picture home format, these inauspicious productions provided not only a window to a whole other world, but also immediate relief for those not fortunate enough to make their fantasies into reality. Thousands of these underground movies were made between the 1960s and 1980s, and sold in the back of sex magazines or distributed to the almost 60,000 private "peep show" booths located in adult stores in most major cities.

Impulse Pictures is proud to present 42ND STREET FOREVER® - THE PEEP SHOW COLLECTION VOL. 4, a new, continuing series of salacious 8mm shorts, re-mastered from original film prints. This collection features fifteen classic "loops" with titles like "Wheelchair Mary", "Leather Lust", "One in the Oven", "Do It on My Face", "Tammy and the Doctor" and more. Watch for adult film stars Erica Boyer, Linda Shaw, Sharon Kane, and Annie Sprinkle in these pants-popping, jaw-dropping nudies!

To purchase please contact: CAV Distributing Corporation (650) 588-2228 or sales@cavd.com or your local distributor.